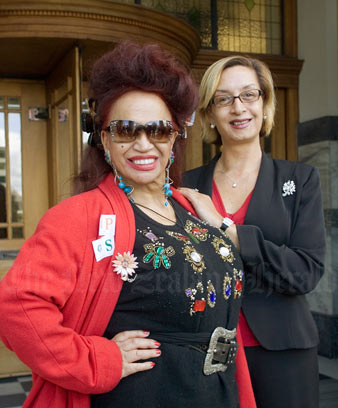 Carmen Rupe and Georgina Beyer blazed a trail for transgender rights and visibility in New Zealand. Beyer made history in the 1990s as the world’s first transgender mayor and member of Parliament. The idea of ‘gender diversity’ covers a wide range of identities. Some of these identities are specific to Aotearoa New Zealand and the Pacific.

Transgender (often shortened to trans) is a specific identity, but also an umbrella term for people whose gender identity does not match the sex they were given at birth. It includes non-binary people – a range of identities that are not exclusively girls/women or boys/men, including pangender, bigender, gender fluid, and agender.

‘Transitioning’ is a term for the steps people take to change things in their life to express their gender identity. People make different choices about how they do this. Actions may include seeking legal recognition of one’s gender; social steps such as changing clothing, hair and ways of speaking and behaving; minor cosmetic procedures; and medical measures such as hormone therapy and gender-affirming surgery.

‘Transsexual’ people have changed, or are in the process of changing, their sex to match their gender identity. This term began as a medical description and is no longer used by some groups. However, those who identify as a transsexual man or transsexual woman continue to prefer it.

Cross-dressers may wear the clothing of the ‘other gender’ full-time or part-time, and this is often key to a person’s identity. Drag queens and kings usually cross-dress for performance.

Māori and Pasifika gender and sexual identities do not always match up with Western concepts. Often, the terms used have no direct English translation.

Some Māori use the terms takatāpui, whakawāhine or tangata ira tāne to express their culture, wairua, gender and sexual orientation.

Pasifika gender and sexual identities include fa’afafine (Samoan), fakaleiti (Tongan), ‘akava’ine (Cook Islands), māhū (Hawaiian), vaka sa lewa (Fijian), rae (Tahitian) and fiafifine (Niuean). Fa’afāfine (meaning ‘in the manner of a woman’) have been part of Samoan communities for centuries. A boy who likes doing feminine tasks may be recognised as fa’afafine while young, and take on feminine behaviours such as wearing women’s clothes and playing women’s roles in the village. Life can be harder for fa’afāfine in New Zealand, where people are generally expected to be clearly either men or women.

In New Zealand and around the world, operations are performed on some children or infants to make their genitals more closely meet expectations about being male or female. In the past these practices were not often questioned, but today many think that people should decide whether they want surgery when they are older.

Some intersex people may not know that they have a variation in their sex characteristics.

Transgender and intersex people sometimes receive insulting comments, abuse and violence. It can be hard to get birth certificates changed to fit their identity. In the past, many transgender people worked in the sex industry and/or as entertainers, because of limited other choices and also because they were accepted and found a sense of community in these industries.

The transgender community is still fighting for the Human Rights Act 1993 to be changed to make discrimination on the basis of gender identity, gender expression or sex characteristics unlawful.

Print the full story
Next: Page 1. Defining gender diversity Next