For Māori, the period from 1860 to 1945 was marked by both loss and resilience as their population first declined and then grew more slowly than the Pākehā population. Māori became a minority language that was being crushed by the weight of colonisation. These maps show the steady loss of Māori land in the North Island between 1860 and 1939 through confiscation and purchase.
Te Ara - The Encyclopedia of New Zealand

Following the signing of Te Tiriti o Waitangi, Māori landholdings declined substantially. The Crown purchased large tracts of land in the 1840s and 1850s, confiscated more after the 1860s wars, and separated Māori from their lands through the workings of the Native Land Court system. Without land and its resources to sustain them, Māori were more susceptible to disease and poverty

The Māori population, ravaged by European diseases and the New Zealand Wars, reached its lowest level in 1896, when the census recorded just 42,113 people. Although it grew again as the birth rate increased, the loss of te reo Māori speakers was considerable. Deaths in the 1918 influenza pandemic and two world wars also reduced the transmission of te reo Māori to the next generation.

The Crown separated those who remained from their language, customs and knowledge. As early as 1847, Governor George Grey prioritised teaching in English in an Education Ordinance. The Native Schools system set up in 1867 expanded this policy. By 1890 education policy aimed to ensure that Māori children who arrived speaking their own language had it replaced by English. Te reo Māori ‘had to be left at the school gates’. 1 As a child, Sir James Henare was told by a school inspector that ‘English is the bread-and-butter language and if you want to earn your bread and butter you must speak English’. 2

As the children of this period grew into adults and had children of their own, they were reluctant to teach them Māori, not wanting them to have the same experience at school. The impact of the education policies is clear: while 90% of Māori schoolchildren could speak Māori in 1913, only 26% could do so in 1953.

There was also a gradual decline in the mana of te reo Māori in Parliament. From its beginning, Parliament was a colonial Pākehā space and Māori had to campaign for representation. Once they were in Parliament from 1868, Māori MPs faced a language barrier (although an interpreter was appointed in 1870, and three in the 1880s). Communicating parliamentary practices and policies to their people could be difficult. Some efforts were made to translate speeches, bills and papers that were thought to be relevant to Māori (such as the Māori Hansard, Nga Korero Paramete, 1881–1906), but English was still the first language of Parliament, with te reo Māori an afterthought.

In 1909, the number of interpreters was reduced to one. Four years later, the Speaker of the House ruled that Māori MPs should speak in English if they were able to. From 1933, Māori MPs were permitted to speak in Māori, but only briefly, and only if they immediately provided a translation. Three years later, parliamentary debates began to be broadcast over the radio. While this was a world first, the language broadcast was almost entirely English.

Despite the decline of te reo Māori, there were also signs of resilience and hope during the late 19th century and into the 20th.

The newspapers that were published in te reo Māori by Māori from the 1860s acted as a political forum, informing Māori about legislation, land sales and British social customs. The first newspaper produced entirely by Māori was Te Hokioi o Niu-Tireni, e rere atu-na (The War-Bird of New Zealand in Flight to You), published just before the Waikato War at Ngāruawāhia. Edited by King Tāwhiao’s second cousin Wiremu Pātara Te Tuhi, Te Hokioi supported the Kīngitanga movement. Waiata continued to be an important form of expression and cultural identity. From the late 19th century Māori concert parties travelled to settlements to perform, encouraging tribal identity and sometimes raising funds for community projects.

When music recording technology came to Aotearoa, Māori were among the first to record both waiata and popular music. One popular early recording artist was Ana Hato, who had success with songs like ‘Pokarekare Ana’, ‘Hine e Hine’, and ‘E Pari Ra’ in the late 1920s and early 1930s.

After a century of colonisation, there were still signs of vitality in te reo Māori. The government used te reo Māori to recruit Māori for the armed forces and encourage people to raise funds for the war effort. 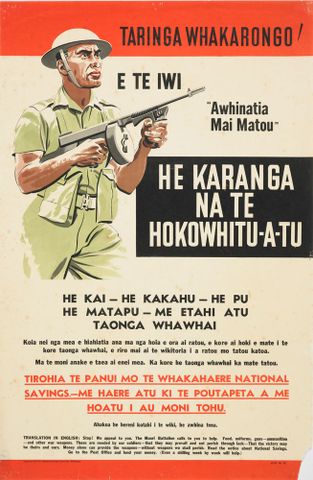 Te reo Māori was used as a form of communication by 28 (Māori) Battalion. Māori was used to convey messages in radio communications that the Germans could not understand. And, if the password for entering camp had been forgotten after a night out, a soldier could just respond to the sentry in Māori.

As the country emerged from the Second World War, te reo Māori was suffering from the many hardships the Māori people had endured. But the worst was yet to come.