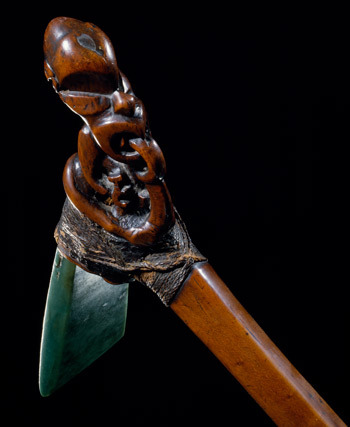 Māori warfare traditionally involved hand-to-hand combat, with weapons designed to kill. Reasons for war could be practical, such as for land or resources, but could also be to increase mana or as revenge for insults.

War is woven into Māori traditional stories, including the creation myth. After separating Ranginui (the sky father) and Papatūānuku (the earth mother), their sons fought. Tūmatauenga (also known as Tū) won, and punished his brothers.

Tūmatauenga was the major war god. Others included Kahukura and Uenuku, both war gods associated with rainbows, and Maru, a war god in the Taranaki region.

Tohunga (experts in traditional lore) dedicated young boys to Tūmatauenga or other local war gods, and acted as mediums for war gods during battles.

Wars broke out between tribal groups for a number of reasons, including competition for land, food and natural resources. Wars were also fought to increase the mana of individuals or the tribe, or for utu – pay-back for insult or injury.

At the end of a war it was vital to make peace. Sometimes arranged marriages between the victors and high-ranking women of the defeated tribes were used to seal peace.

After a series of wars the Moriori people of Rēkohu (Chatham Islands) declared an end to war and had a long period of peace.

Traditional Māori weapons were designed for hand-to-hand combat. They include:

A war party was called a taua. The size of the taua could range from a small group to a few hundred people.

Trickery and deception were common strategies to win a battle, and surprise was an important tactic. At a welcome onto a marae either the hosts or the guests might suddenly attack the other.

Because pā (fortified villages) were hard to get into, tactics were used to lure people out. One tribe made a large fake whale out of dog skin and hid warriors inside to attack the villagers who came to investigate.

Battles usually took place in the summer months, after the harvest was finished. Sometimes alliances were made between different groups before a battle. Gifts were given, and if they were accepted it meant a willingness to join in battle. A tohunga would put the war party under tapu before they set out. Before battles the war party would often perform a haka.

The first person killed in a battle was known as the mataika (first fish). The mataika’s heart would be cut out and offered to a god. The leader would often stand behind his troops and exhort them.

When the war party returned home they would undergo a ritual cleansing, which involved lifting the tapu.

Print the full story
Next: Page 1. Atua – origins of wars Next