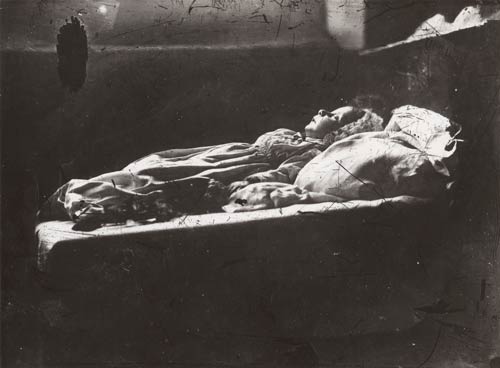 This photograph of a toddler, laid out in her best clothes prior to burial, was taken in the 1870s. The name of the child and the photographer are unknown. Post-mortem and memorial photography flourished in the late 19th century. Often this would be the only photograph of a dearly loved child. Photographs of the deceased were rapidly integrated into the mourning practices of Māori and non-Māori from the 1860s. In the early 21st century, post-mortem photographs are seldom taken, but photographs of the dead person are frequently incorporated into funeral and memorial services.

Ruth McManus and Rosemary Du Plessis, 'Death and dying - Bodies of the dead', Te Ara - the Encyclopedia of New Zealand, http://www.TeAra.govt.nz/en/photograph/30408/post-mortem-photography (accessed 27 May 2022)