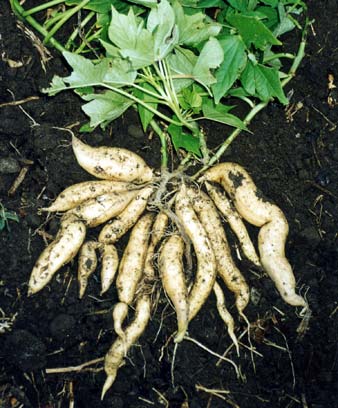 Before European arrival in New Zealand, carbohydrates were hard to find. Māori placed great value on the kūmara, a sweet potato they had brought from Polynesia. The remains of their early gardens and storage pits can still be seen around the country.

The arrival of kūmara

The Polynesian ancestors of Māori brought kūmara (sweet potato) with them as a food plant when they arrived in New Zealand in the 13th century.

It is believed that early Polynesians had voyaged to South America, and took kūmara from there to Polynesia.

The climate in New Zealand was much cooler than the tropical islands of Polynesia. Kūmara would not grow in the winter – instead, it had to be stored and planted out again when the weather warmed up. Some areas were too cold to grow it at all.

The other food plants that people brought from Polynesia did not grow well in the new, cooler country. So kūmara became very important.

The red and yellow kūmara that we eat today are a different variety from traditional Māori kūmara – they came to New Zealand later, from North America.

Māori developed large kūmara gardens, often on sloping, sunny land. They grew the plants in mounds of soil, adding sand and gravel to make it drain better. Fences protected the gardens from wind and pūkeko birds. The plants were sometimes attacked by caterpillars of the kūmara moth, and Māori kept tame seagulls to eat the caterpillars.

Kūmara tubers were harvested around March. They were stored in underground pits over winter, so some could be eaten and the rest planted out in the next spring.

Kūmara were cooked in hāngī (earth ovens), boiled, or steamed. Small tubers were sometimes dried in the sun.

Rongomātāne (Rongo) was the god of kūmara and other cultivated plants. When the kūmara was planted, prayers were said. Sometimes an offering was made – often a bird. The priest placed a tapu (religious restriction) on the crop until it was ready to be harvested.

Stone images or carved wooden sticks were believed to protect the mauri (life force) of the growing kūmara.

Print the full story
Next: Page 1. Introducing kūmara to New Zealand Next