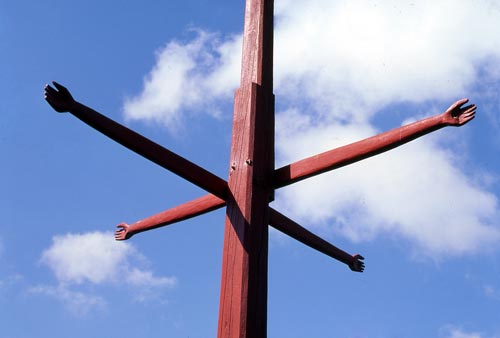 At Maraekōwhai on the banks of the Whanganui River stand two niu (Hauhau ceremonial poles). Shown here is the first, Rongo Nui (meaning ‘widespread peace’), which was put up in 1864 by the inhabitants of Maraekōwhai. They had been converted to Hauhauism. The pole had the spirit of war embedded in it by a tohunga. The arms of the pole were intended to radiate that spirit in all directions. At the time the pole also flew flags, and ceremonies were held beneath it. When peace came to the river two years later, a second pole, known as Riri Kore (meaning ‘no anger’ or ‘no battle’), was put up to counterbalance the war pole.