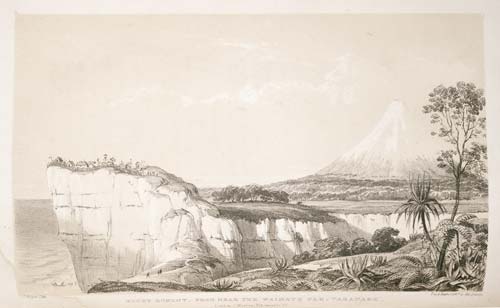 The team contracted to survey the future town of New Plymouth under chief surveyor Frederic Carrington travelled to Taranaki from Wellington in two parties, one on the ship Brougham and the other overland along the coast. Charles Heaphy was in the overland party and produced one of the most distinctive early images of the mountain and two of the Māori settlement at Ōtumatua, near Pīhama.

This lithograph from one of his sketches shows Waimate and Ōrangi-tuapeka pā at the mouth of the Kāpuni Stream in 1840. Both pā had been destroyed six years earlier by an Australian-based detachment of 50th Regiment troops and Royal Marines during the rescue of members of the Guard family and others taken prisoner by Māori after their vessel Harriet was wrecked off Cape Egmont.

Before climbing the mountain